We are hiring!  Apply Now

On March 13, 2019 with the theme of “Meeting the Heroes”, MINISO’s new product release meeting was held in Guangzhou, China.

The world’s well-known retail brand MINISO officially announced the cooperation with globally renowned top IP Marvel to develop a series of peripheral products, which will be put on sale in over 100 countries. The MINISO x MARVEL products exhibition area was set up at the new product release meeting. There were as many as 2000 Marvel products on display, including Spider-man, Captain America, Iron Man, Hulk, Captain Marvel, Thor and Black Widow.

This time, the copyright owner of Marvel has granted authorization to MINISO in 123 countries, covering five continents. The licensed products covered 13 product categories of MINISO, which was unprecedented for Marvel.

Mr. Ye Guofu, the global co-founder and CEO of MINISO, said that Marvel is the world’s top IP with a wide range of influence and appeal. He loved the Marvel movies personally, and watched almost every movie of Marvel. Ye believed that good products should serve the masses instead of serving a small part of people. This is the reason why MINISO would cooperate with Marvel after developing cooperation with Hello Kitty, Adventure Time, We Bare Bears, Pink Panther, Pantone and Sesame Street. MINISO will continue to follow the principle of high quality and affordable price, and bring authentic peripheral products with first-class quality and affordable price to marvel fans around the world.

Ada Dou, the executive vice-president of MINISO Commodity Center, indicated that there were three major factors for Marvel to cooperate with MINISO:

The principle of high quality and affordable price; and

The high standard product design and quality control. Marvel has formed a subtle complementary relationship with the main consumer groups of MINISO. With this cooperation, Marvel can open up the female market, while MINISO can attract more male consumers through its series of products at the same time, Ada said.

The peripheral products launched by MINISO in cooperation with Marvel are not only excellent in product design and quality, but also very competitive in price. An exquisite mug, for example, costs as little as RMB 7.9 on the market, while a Marvel superhero ornament only costs RMB 10 in MINISO, which is almost one tenth of the similar products in some boutiques.

As for MINISO, cost-effective products are always a powerful weapon to open up the global market. With this concept, MINISO was able to quickly enter the retail market in more than 80 countries within 5 years. According to MINISO’s official data, there are more than 3500 MINISO stores throughout the world so far, with RMB 17 billion turnover in 2018.

Through constant cooperation with world famous IPs, on the one hand, MINISO makes use of the appeal of IPs to promote product sales; on the other hand, it also makes use of the influence of IPs to enhance brand awareness and reputation, and explores a unique “MINISO model” in the home furnishing market. 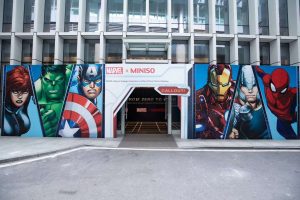 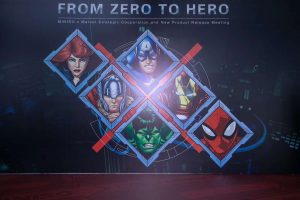 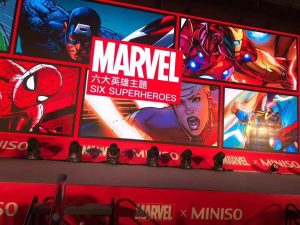